Naturally, I paid, drove, parked, and all that, but we had a blast at STOMP. 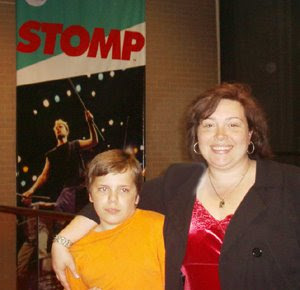 My son could care less about all that.

In his own words, “I like to make noise and hit stuff”. So this show was the perfect bit of culture for him.

As a musician, this show was a thrill. I’ve always wanted to create a “toy band” of my own, using toy instruments to create some sort of child’s symphony, so the idea of taking every day items like lighters, brooms and trash cans to create a rhythmic tapestry of sounds and movement is pretty exciting to me.

But STOMP is also a marketing machine. They get it. And they market well.

The merchandising display features trash can lids that have been spray painted with pricing. VERY clever.

The performers are keen on audience interaction. They involve you from the very opening until the very closing of the performance – and even in the encore. Few shows engage the audience in such a personal way. And we all know that the personal touch makes us more endearing to our audience – whether we’re in a theater, doing a home party, or teaching at the head of the class.

And the best part? I was leery about shelling out my hard earned cash for a night out with an 11 year old that could have spelled disaster. Then when I arrived and saw there would be no intermission, I thought the performance was going to be even SHORTER and LESS worth my money.

I was wrong. When I left the theater, I was just another crazed fan of STOMP. I didn’t even flinch at the ticket price. I got my kid the best seats available for the show, and I had no qualms about plunking down the coin to get them. I knew they had earned every penny for that show each performer was on the stage at least 80% of the time, and all of them were working up a sweat jumping, slamming, thumping, snapping, clapping, and creating sounds with some of the most unlikely objects. My kid is STILL trying to figure out how they made all that noise without tap shoes.

I didn’t tell him they miked the floor.

Disbelief suspended, these performers were not just musicians or dancers, they were characters in my world. No dialogue to guide them, but a whole lot of entertaining sweat and old-fashioned work.

And I gladly paid for every minute of it.