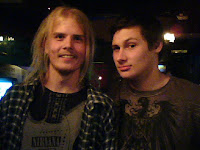 So in my mad ramblings, I don’t talk too much about my personal life. I figure there’s more important stuff going on in the world besides me.

But today, I’m sharing pictures from a recent birthday party.

What makes this party so unique is that the attendees were, for the most part, cast member from a local production of the musical, Chicago.

One cast member, Aaron, celebrated his 20th birthday and invited all of us cast folk to join in the soiree. He’s the Blonde in that first picture, standing next to Anthony. 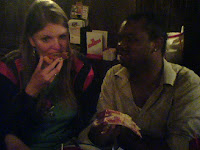 It was such a blast to see the cast reunite for something like this. We spent a few months together working our BUTTS off for this production. Choreography was tough – at least for locals that haven’t had a dance class in eons. Music was challenging, but we were blessed with some very talented cast members that could out-sing some of the greats on the karaoke stage – and some of us really tried, believe me.

So we ate, drank and had pickles – it’s a tradition, the pickles. You’ll have to ask me about it sometime.

But why is this in a Marketing Blog, you ask? Well, a couple of reasons. This blog also doubles as an occasionally personal blog (deal with it), and because it emphasizes what a good story (Chicago), a loyal customer base (the cast and crew), and a powerful product (Vertigo Theatrics) can bring about.

Ted, the guy that runs the show over there, is really a humble giant of a guy. In our many conversations, one of the things that he’s touched on is the fear that he’s not making a difference in the lives of people in our area. Now I’ve worked with Ted on several other productions where the cast and crew become close in an almost magical way, but he always wrote it off as a fluke. Well, I think the third time’s not a coincidence: it’s what makes a good theater company GREAT: 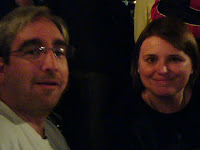 Jen and Steve, to my knowledge, have never done a show together before. This show stretched Steve in a leading role. Jen had to dig deep for some amazing choreography. This show really brought them together and gave them a new “thing to do” as husband and wife.

New friendships were forged – some of which transformed lives. People came to this show with broken pieces, and somehow, through the power of theater, shared trials and a good belly laugh, they found themselves on the mend. 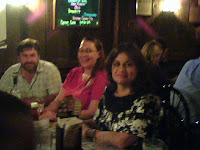 Super HEROES came to the rescue. Anthony’s folks gave us an amazing set, and raised the bar for all of Ted’s future productions. And don’t get me started on the amazing job Barb did on the costumes. Selfless giving. Yeah, they’ll say it was because they wanted Anthony’s first production to be spectacular, but few people give of themselves that way for total strangers – even if their kid is involved. And the tireless day-in, day-out work of Ted’s “better half”, Jacque is a testament to the passion they both have for this community. 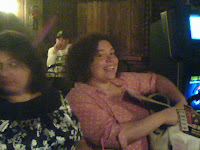 And me? I just took it all in. Making notes so that Ted couldn’t backpedal on this one. There was so much joy in a room that never would have been there if it weren’t for companies like this, productions like this, and people like Ted and Jacque who found a passion and nurtured it with “Class”.

There were others in this cast of characters that didn’t hang around long enough to pose, and others still that couldn’t make it to this seemingly simple birthday party.
But this was a party unlike most. This was a cast of strangers that became friends for a time, who reunited for one of their own to celebrate, remember, and be grateful. These people have their own paths in life and will take new directions now that the show is over.

But I think it’s safe to say we were ALL transformed by what a little passion can do.
THANKS, TED! And HAPPY BIRTHDAY AARON!